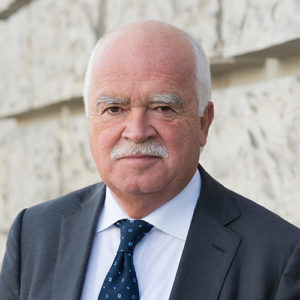 Dr. Peter Gauweiler has several decades of experience both as lawyer in large civil proceedings, many of which garnered national attention, and as defense counsel in numerous criminal proceedings. In addition, for many years he has appeared as plaintiff before the Federal Constitutional Court in high-profile constitutional proceedings based on European and constitutional law. These lawsuits have become the basis for the Federal Constitutional Court’s landmark decision on the Lisbon Treaty and the orders for reference on the European Court of Justice in the matter of the European Central Bank. Dr. Gauweiler was admitted to the Munich Bar Association in 1978 and worked from 1978 to 1982 as lawyer with the law firm Gauweiler & Sauter and from 1996 to 2019 in the firm Bub, Gauweiler & Partner. In October 2019 he joined the lawyer Alfred Sauter again in the law firm Gauweiler & Sauter for the joint practice of law. In addition, from 1972 to 1982 Dr. Gauweiler was lay member and from 1982 on professional member of the City Council and head of the Regional Administrative Office of the state capital Munich. From 1986 to 1994 he was a member of Bavaria’s state government, first as state secretary and then as state minister. From 1990 to 2002 Dr. Gauweiler was a member of Bavaria’s state parliament, and from 2003 to 2015 he was a member of the German Bundestag (parliament). He was awarded the Bavarian Order of Merit and the Federal Cross of Merit as well as the medal “München leuchtet den Freunden Münchens” in gold. Dr. Gauweiler is married and has 4 children. A list of all his publications, books, and articles as well as texts of his speeches and interviews can be viewed at www.peter-gauweiler.de

This website uses cookies to improve your experience while you navigate through the website. Out of these cookies, the cookies that are categorized as necessary are stored on your browser as they are essential for the working of basic functionalities of the website. We also use third-party cookies that help us analyze and understand how you use this website. These cookies will be stored in your browser only with your consent. You also have the option to opt-out of these cookies. But opting out of some of these cookies may have an effect on your browsing experience.
Necessary Always Enabled
Necessary cookies are absolutely essential for the website to function properly. This category only includes cookies that ensures basic functionalities and security features of the website. These cookies do not store any personal information.
Non-necessary
Any cookies that may not be particularly necessary for the website to function and is used specifically to collect user personal data via analytics, ads, other embedded contents are termed as non-necessary cookies. It is mandatory to procure user consent prior to running these cookies on your website.
SAVE & ACCEPT
Go to Top